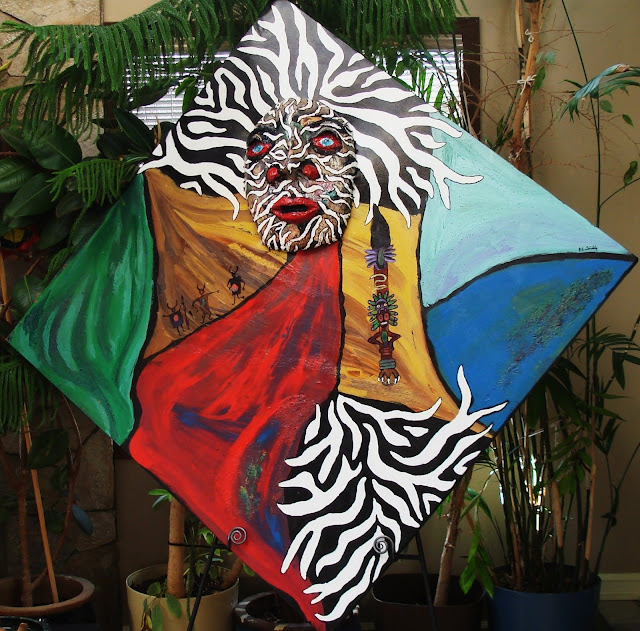 In a Kraal in Africa there lived Kubwa Kaka who tended the goats for his family. He took them out every morning and brought them back to the Kraal every evening. He always brought his goats to a special place by the watering hole where the sweetest grass was and to go there he had to pass a rocky pass. At those rocks there also lived a big old hyena. He could see the hyena behind the rock, the eyes glowing in the shadows but he never bothered him, as the boy was big and strong and the hyena was afraid of him.

As time passed the boy was old enough to join the group of hunters and the job of herding the goats was given to Kidogo Kaka, his younger brother. He went with him and showed him the place and also pointed out the hyena to him. He told him that the old hyena would not bother them and sure enough, the hyena only watched them with his yellow eyes.

The next morning Kidogo Kaka went by himself and came to the spot where the hyena was waiting. When they came close, the hyena did not stay behind the rocks but started to charge the boy and his goats. The boy and the goats run away as fast as they could. One of the little goats was not quick enough and the hyena grabbed it took it away to eat it.

Kidogo Kaka  was very upset and his father was very angry about loosing a goat. He told Kidogo Kaka to take a stick and not let the hyena scare him away. The next day the hyena attacked again, even so the boy screamed and waved his stick. They escaped and Kidogo Kaka went to another place to graze his goats as he was afraid of the Hyena. But this field was not so green and the grass was dry and short as there was no water near by. Soon the goats started to loose weight and became thin and straggly looking. The father said that something had to be done, as the goats would not have enough meat on them when they were slaughtered and the family would not have enough to eat.

That’s when they decided to go and see their Dawa Ya Mtu, their wise old Medicine Man. He lived in a mud hut up in the hills and was known to not only  heal any illnesses and remove spells, but also solve any problems. The father and son arrived at the hut just as the sun was rising and brought him a gift of gourds and a chicken so he would listen to their story and help them.

Dawa Ya Mtu listened to Kidogo Kaka’s story and thought for a long time while he put some herbs on a fire which made it smoke with a pungent smell. He also sang some songs in a language they could not understand. When he was finished he told them what to do. He instructed the father to carve a large, big Fimbo Wafanyakazi staff for the boy. He was then to raise the staff when he came close to the hyena so the staff and the boys shadow appeared tall and strong. They hyena would then think that it was not a little boy but a big man by the large shadow it created and he would leave Kidogo Kaka alone and let them all pass.

The father thanked Dawa Ya Mtu and started carving a large Fimbo Wafanyakazi  staff as soon as they came home. He used a MIZIZI YA MTI tree root from a Mkate Mti (bread tree) and made big and large and carved some clawed feet at the bottom and masks on the top of the staff. When Kidogo Kaka came to the spot were the  Hyena lived from now on, he lifted his staff and the hyena let them pass. Soon the goats put on some weight again and were fat end healthy from the green grass they were eating.